Zelig: The Faculty of Mockumentary by David Trefethen

Marriage and Gender Roles: The Reality of the 21st Century Woman by Ashley Bournival

When Even No News is News: An Analysis of the Media Coverage of the O.J. Simpson Trial and the Effects on the Media Today by Beth Reny

CONTRADICTORY GRAMMAR: The Influence of Production Variables on Audience Evaluation in A CLOCKWORK ORANGE by Brian McKenney

The Future of Television by Brian McKenney

Representations of Jewish People in the Media by Haley B. Dunn

"I can see Russia from my house:" Tina Fey & Political Parody by Leslie Dow

Scheming on Screen: The Art of Audience Manipulation as Manifested in "John Q." by Jenna Heinz

Buck vs. Bell and the Eugenic Sterilization Movement in Early 20th Century America by Andrew Long 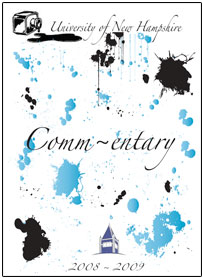