Representation in Media – The Good, The Bad, and The Ugly by Hiwalani Kapanui

“Playing” to God: An Analysis of Video Games through the Lens of Religion by Jason Paul

Protest Policing and the Privatization of Surveillance by Jenna Ward

Conversation Analysis: An Interaction between Amy Schumer and Ellen DeGeneres by Jennifer Royka

Understanding the “Other” Perspective by Sriyaa Shah

Recognition on the Olympic Stage: The Tension between Olympism and Universalism by Alana McKay

Yes, White People Can Be Terrorists, Too by Dillon Mulhern

Queer It Up: Queering Food Justice by Zoë Parsons

Shaping Adolescence: The benefit of Young Adult novels, specifically This One Summer by Tali Cherim

You Have to See It to Believe It: Mental Illness vs. Physical Illness in Nate Powell’s Swallow Me Whole by Tali Cherim

The Case for a Cultural Competency Course
Eva Ford 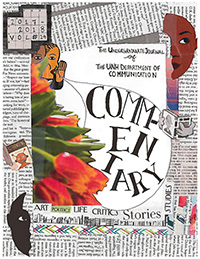