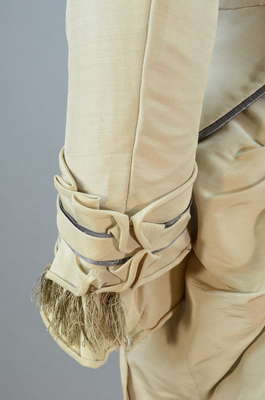 The bodice is made of six pieces cut as one with a peplum extending over the hips: two front panels with two vertical darts each beneath the bust extending all the way to the peplum hem and one horizontal dart at the side, two side-back panels joined to the back with curved seams, and two center-back panels with a center-back seam. In front the peplum comes to a double point, rises sharply to the natural waistline at the side front, drops once more to cover the hips at the sides, then returns to the natural waistline at the seam with the side-back panel. Its bottom edge has thick piping covered in a contrasting steel blue plain-woven silk. At the side back and center back, the peplum flares into a pleated coat-tail resembling an 18th century frock coat, all bound with a wide bias band of the same gray faille fabric which is outlined with the blue silk in flat strips, like empty piping channels. The bodice opens in front with ten large domed buttons which are covered with the dress fabric and embroidered with gray silk. The neck is high, finished with narrow piping made of the blue silk, and with a small standing ruffle of lace basted to the inside. The bodice is flat lined with brown cotton and the peplum is lined with scraps of the gray faille.

The shoulders are slightly dropped and have thick gray faille piping. The sleeves are three-quarter length with a curved two-seam construction and are smoothly inserted into the scye with no gathers. They end with an applied gray faille cuff consisting of a 5.7 cm / 2.25 deep ruffle over which a 6.4 cm / 2.5 in. bias strip is sewn, which has a box pleat positioned at the back of the sleeve seam and two knife pleats next to it on the outside of the arm; this is itself topped with a 2.54 cm / 1 in. wide bias band edged top and bottom with flat blue silk strips. The box pleat is sewn into a frog-mouth fold over this band. A fall of gray silk fringe is sewn at the outside of the sleeve between the ruffle and the pleated band.

The collar piece is separate, made of the gray faille and with the thick blue silk piping and gray fringe at the outside edge. Along the inner edge, three upright stacked box pleats at the back release into knife pleats that frame the face and reduce in size as they reach the ends of the collar tabs. The pleat edges are bound with the blue silk.

The skirt has two components, a floor-length underskirt that is longer and more full in back than in front, and a shorter open-fronted overskirt. The underskirt opens in back and is constructed with six gored panels in front and at the sides, with another two 52.1 cm / 20.5 in. full-width straight panels cartridge pleated to a waistband in back. It has two rows of ruched gray faille ruffles at the hem with a deep panel of knife pleats above them, topped with a broad band edged with flat blue silk. The six-panel overskirt wraps around from the back to close at center front, cut to fit the waist at the front and sides and with all its fullness brought to the back with deep knife pleats. What appear to be the turned backfront edges of the skirt are additional triangular panels. The edges and hem are bound with another wide bias band edged with flat blue silk. The overskirt is pulled into a bustle in back with interior ties and permanently-set pleats at the sides. The tail of the peplum rests on top.

Close examination reveals the general lack of skill of the maker, with uneven pattern cutting, inexpert finishing techniques, tell-tale mistakes such as buttonholes being too small for the buttons once they were covered with fabric and embroidered, and the off-center placement of the box pleats on the collar. Likely homemade. Machine-sewn and hand-sewn.

Gift of the Freeman family. Worn and likely made by Celestia Freeman, wife of a textile mill overseer at Great Falls Manufacturing Company in Somersworth, New Hampshire.