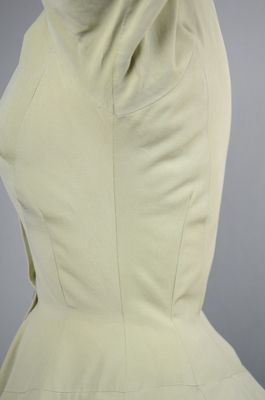 1954. Pale green faille one-piece shirtdress, having short sleeves and buttoning from collar to hem, with the fitted, cinch-waisted bodice and full-circle mid-calf-length skirt in the New Look style, designed by Anne Fogarty for Margot, Inc.

This shirtdress translates the concept of a masculine button-down shirt into a woman’s garment that follows the exaggerated New Look silhouette pioneered by Christian Dior in 1947. It has simple lines but a complex construction, with twenty pieces in all. Its two front panels are each cut in one 109.2 cm / 43 in. length (measured at the center-front opening) to include the front of the bodice, the front half of the sleeves, and the center portion of the skirt, and have twenty-one buttons and bound buttonholes beginning at the high neckline and reaching to 21.3 cm / 8.375 in. from the hem. In the bodice, the front panels reach to the sides of the bust and accommodate its curves with one diagonal dart each. The rest of the dress has a waist seam joining five additional bodice panels to twelve additional skirt panels..

The bodice panels are shaped by curves and darts to nip in tightly at the waist and flare out over the hips, creating a dropped but extremely fitted waistline. Each side of the bodice is made with one side-front and one side-back panel, their top edges cut to wrap around the underarm then reaching up into the front or back of the dress respectively, together forming the bottom of the scye for the sleeve. Each of these side panels has a long vertical dart beginning at its bottom edge and ending level with the under bust. The two back panels of the bodice are cut to include the back half of each sleeve and are joined to each other by a 49.5 cm / 19.5 in. long center-back seam. They dip to a point in back that drops 9.5 cm / 3.75 in. below the waistline.

The skirt is a full circle at the hem, its gored panels shaped to fit the waist seam without gathers or pleats then flaring widely. Three panels flank each side of the full-length center-front panel, reaching to the side seams at the waist. The back half of the skirt has a total of six panels, with the middle seam of this group falling at center back. The entire dress appears to have had its front and back sections fully assembled before being joined to each other with one 33.7 cm / 13.25 in. long seam along the top of each arm from the neckline to the sleeve hem, and another, 111.1 cm / 43.75 in. long continuous seam beginning beneath each arm at the sleeve hem, then forming the bodice and skirt side seams, and finally ending at the skirt hem. The skirt has pockets hidden in this seam.

The dress is unlined and has a 1.6 cm / 0.625 in. wide waist stay ribbon at the natural waist, secured with one hook. It has no internal shaping elements, but is tailored to be worn over a separate girdle and a stiff crinoline petticoat.

Professionally made, with a woven label reading “Anne Fogarty® Margot Inc.” Anne Fogarty (1919-1980) began her career as a model before becoming a women’s clothing designer in 1948, often modeling her own designs. She worked for Margot Dresses, Inc. from 1950- 1957 and for Saks Fifth Avenue from 1957-1962 before opening her own company, retiring in 1974 but continuing to free-lance until her death. She was heavily influenced by Christian Dior’s New Look, which was a deliberately exuberant response to the frugality and utilitarian clothes of the post-WWII years; both designers relied on the contrast between snug, fitted bodices and very wide petticoat-supported skirts to create an aesthetic they considered to be ladylike and “ultra-feminine.” Fogarty’s dresses were more understated than Dior’s, intended to be accessible for a more mainstream market, relying on good cut over trimmings. She designed her first shirtdress applying this aesthetic in 1954, and it became one of her signature looks. Her silhouettes narrowed after 1956 as she turned more to sheath dresses and high-waisted Empire lines. She published her first book in 1959, Wife Dressing: The Fine Art of being a Well-Dressed Wife, which codified her principles of femininity in dress; this later influenced the costuming for the 2007-2015 television period drama series, Mad Men. Machine-sewn.