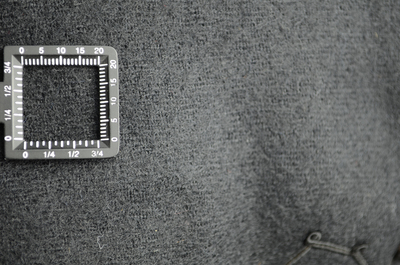 c. 1902. Black wool jacket with bertha-like scalloped revers or lapels and a bloused or pouched front, trimmed with topstitched silk and soutache, closing in front, and with full-length sleeves cut wide at the elbow, ending in elaborate silk cuffs.

The jacket is bag-lined with a black plain-weave silk, and unlike a bodice has no boning or complex body-conforming pieced structure. It likely once had a matching skirt as part of a suit. It is made of three main pieces: two center-front panels, and one back panel. The 48.3 cm / 19 in. long front edges are cut with a curve and are forced into a pouched shape when the garment’s nine hooks bring them together. The pouching is also supported on each side by small gathers and a 13.3 cm / 5.25 in. long vertical dart at the hem, and is somewhat awkward in the heavy wool of the garment. The center opening is framed with two vertical lengths of 1.3 cm / 0.5 in. black and white trim woven into diamonds, and from beneath these a single appliquéd length of black silk broadcloth, its outside edge cut into thirteen scalloped peaks, rises from the hem on either side of the jacket opening and wraps, collar-like, around the base of the small neck opening. At its peaks the silk is 7 cm / 2.75 in. wide and in its narrowest valleys is 4.4 cm / 1.75 in. wide. The appliqué is filled with machine-sewn topstitching that follows the contours of the shapes, and toward the outer edge a double row of black soutache braid continues the pattern. The actual edge of the silk is hidden beneath a narrow black scalloped woven trim. The jacket hem is covered with an appliquéd sash made with the same silk, soutache, scalloped trim, and top-stitching; at center back this forms a diamond-like double point 7 cm / 2.75 in. high, and in front it comes to a simple small point. For most of its length it is 3.2 cm / 1.25 in. high.

Large revers or lapels made with the same black wool as the jacket emerge from the silk scallop peaks at the base of the neck in front, as though a shawl or bertha collar were being wrapped around the shoulders. It falls from the shoulders halfway down the jacket in eight deep scallops or rounded tabs, trimmed with the same soutache and scalloped trim as on the front, and each tab is further embellished with six small black silk-covered buttons.

The sleeves are gathered to the scyes with some fullness. They have a curved two-seam construction and are cut with an extremely wide elbow before narrowing to the wrist. The wool cuffs are turned back and cut into intricate shapes that are edged with the silk, soutache, scalloped trim, and top-stitching. Beneath the sleeve they bifurcate into two points before swooping around to the front of the cuff where a single point is formed.

Professionally made, with a label for “Hardy & Folsom Manchester N.H.” Leslie M. Folsom worked in a Manchester mill as a boy before obtaining a position with the Otis Barker store in town, where he remained for thirteen years learning the trade. In 1892 he partnered with Frank H. Hardy to open Hardy & Folsom, a dry goods mercantile, in the heart of the retail district on Elm Street between Manchester and Hanover Streets. The comings and goings of its agents and owners were noted in trade papers in Boston and in New York City, where purchasing agents had an office. Folsom continued alone after Hardy’s retirement in 1906 and persevered despite a three-alarm fire in 1914. By 1917 Folsom was able to celebrate the store’s 25th anniversary with an establishment occupying three floors and a basement. Machine-sewn and hand-sewn.