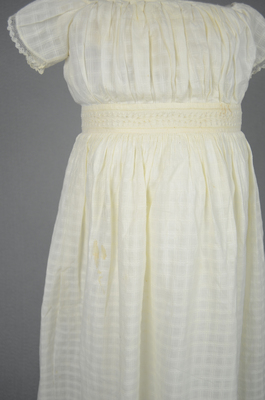 c. 1897, possibly in use as late as 1913. Infant’s white cotton batiste gown, woven with patterned white checks, opening in back and tied with a drawstring at the neck, with short sleeves and a very long skirt.

There was no differentiation in clothing for infants when May Durham Kirtland and her husband James began their family in 1897. Between the ages of about five to six months, before they became mobile, all babies wore long slip dresses such as this example. The long skirts ensured the child’s legs would remain covered, and the simple, unstructured nature of the garment, ideal for accommodating rapidly growing babies, made both dressing and diaper access easy. Washing the dress was easy as well, since the white cotton could be boiled. This dress is entirely hand-sewn and likely made by May herself for her first child, Arthur, who was born on January 29, 1897. It would have been used as well by Paul, born in November of 1899, and then by John, born February 15, 1900. More children were to come but whether they wore this infant dress is not known. On December 24, 1900, Arthur died, one month shy of four years old. His cause of death is not listed in public records but one week later, on January 1, 1901, John died of scarlet fever complicated by pneumonia, at just eleven months old. The mourning dress May wore after that heartbreaking week was given by her to the collection (see Museum Number 162), along with a box of baby clothes (see Museum Numbers 246 and 650), sometime between 1920 and 1939. May and John had six more children between 1903 and 1913.

The bodice is made with one main piece of fabric wrapping around the upper chest from front to the center-back opening, though the right back side is pieced. The neckline is low and square, placed wide at the shoulders, and is controlled with a drawstring that ties in back. The fabric is pleated to a 3.2 cm / 1.25 in. wide waistband made of two narrow strips of batiste sewn with entredeux stitching to either side of a 1.9 cm / 0.75 in. wide white cotton ribbon, itself embroidered with openwork and padded satin stitch buds. There are no shoulder straps, the short sleeves are added in directly to the neckline. The sleeves have one seam and are finished with a narrow length of lace. The skirt has one front and one back panel with side seams and is cartridge pleated to the waistband. The dress is unlined. Homemade. Hand-sewn.

Gift of May Durham Kirtland. Worn by the donor’s children between 1897 and 1914. She had nine children with her husband, John Copeland Kirtland, professor of Latin at Phillips Exeter Academy from 1897-1939.