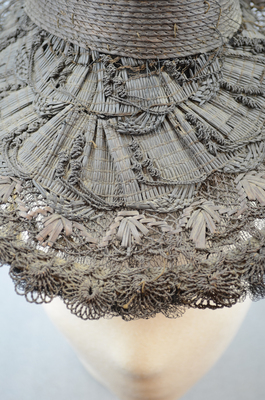 1890s. Black straw bonnet with a small, flat-topped crown and a brim that is wider in front than in back, wired to support the edge.

The front of the brim has four distinct bands of straw worked into two different kinds of lace, which are overlapped and sewn together. The same technique is used for the first two rows from the base of the crown toward the edge of the brim. A third and fourth row of more delicate but different laces reach all the way around the brim edge and are the only laces at the back of the brim. The edge of the brim itself is additionally defined by a simple flat braided length of straw, mostly hidden by the fourth lace.

For the first two rows, the straw is worked in a series of pattern repeats to form the weft of the lace, woven together into one length by multiple rows of grouped warp threads which are spaced out across the width of the straw. Each pattern repeat begins with four narrow two-ply straw cords on the right side which are treated as one unit of weft. Next to this, twelve slightly flattened pieces of straw are woven together by the warp threads into a flat section before they are bent to the left at the outside edge and fed back into the weft, thereby creating an interlaced arc at the edge of the lace and a pattern repeat totaling twenty-four straws. The four cords from the right side are then divided into two sections where they emerge from the warp, and are laid in two swoops over the surface of the woven straw toward the left of the repeat, where they are knotted and looped around the third and fourth warp thread groups, then joined together again to knot and loop around the fifth and sixth warp thread groups before being brought to the back of the lace, ready to be incorporated into the next repeat.

Both laces extending around the entire brim are made of two-ply straw cords. The third row from the base of the crown is a simple loosely interlaced or braided net which is then embroidered with strips of flat straw in a chevron pattern, with a three-lobed leaf shape at the peak of each chevron. The fourth row, which reaches the brim edge, twists groups of four cords into a band which loops together and releases into flower-like elements with eighteen interlocking petals.

This work is licensed under a Creative Commons Attribution-NonCommercial 4.0 International License