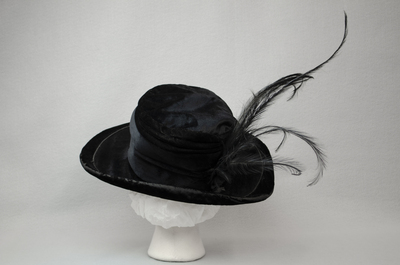 The brim is an oval wider on the sides than in the front and back, with the back turned up and stitched to the crown. The entire edge is reinforced with wire, enclosed with a strip of velvet which is itself hemmed in place over two wires, one the surface and one on the underside of the brim. A fourth wire is placed on the seam between brim and crown. The crown is soft and flat on top, with a seam joining the top of the crown to its sides. The buckram under the crown is shorter than the velvet covering it, so that the extra velvet falls into soft folds on the sides near the top of the crown.

Two varieties of black velvet create contrasting textures. All of the velvet is cut on the bias. The 5.1 cm / 2 in. wide strip enclosing the brim edge is solid velvet, and is folded in half over the edge. The rest of the brim is covered in panne velvet, where the nap has been evenly flattened in one direction. The entire crown is covered with solid velvet, and a contrasting panne velvet hatband 8.9 cm / 3.5 in. wide with horizontal folds is sewn at its base.

A spray of black feathers wired at the base is pinned to the crown above the turned-up brim.

The brim is lined with black solid velvet and the crown is lined with black glazed cotton, basted smoothly to the velvet, and pleated to an oval of piping at the top of the crown. The fabric within the oval is smooth, and has a milliner’s label stamped in gold. Professionally made. Sewn by machine with hand-sewn finishing.